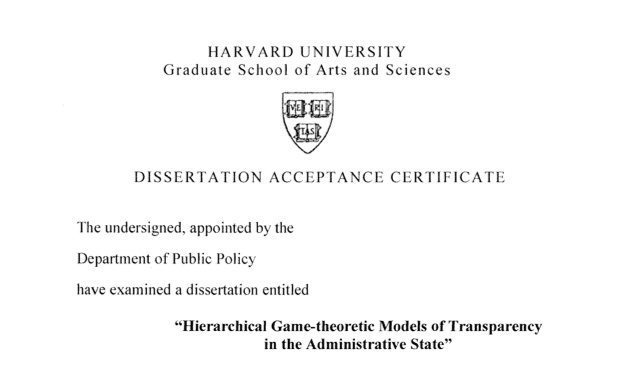 This dissertation develops three game-theoretic models in each of its three chapters to explore the strategic implications of transparency in the administrative state. Each model contains a similar set of three players: a political principal, an agent representing an agency or a bureaucrat, and an interested third party. The models consider the utility of transparency as a tool for mitigating regulatory capture, in which the third party inﬂuences the agent to serve its interest rather than the principal’s. 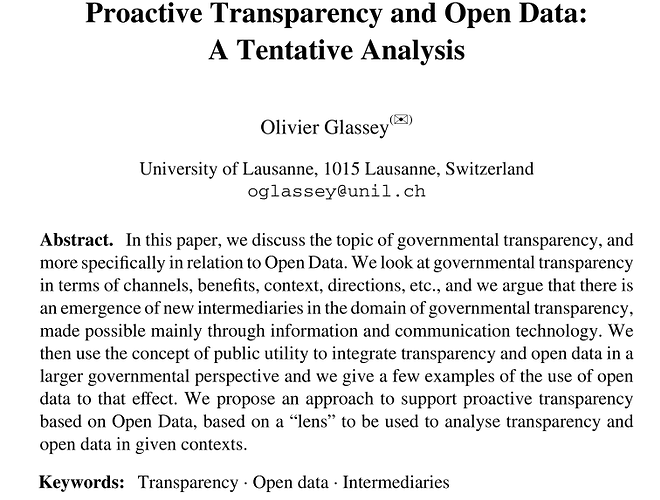 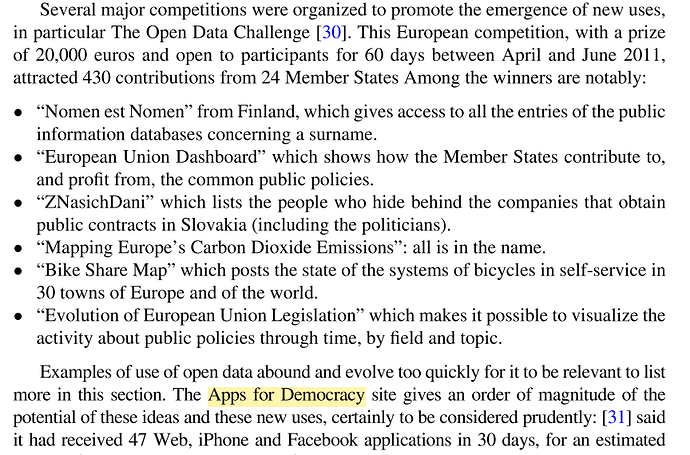 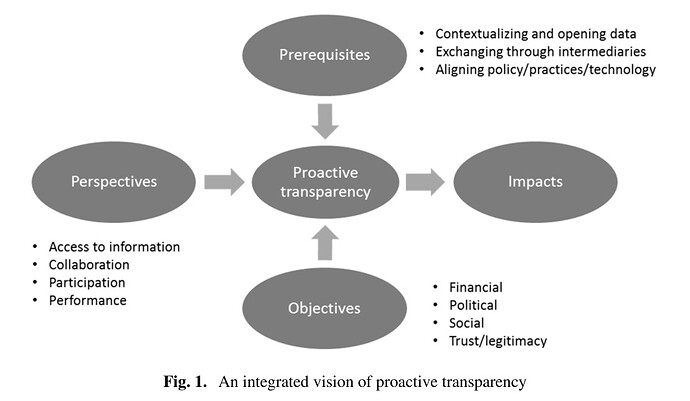 Why Critics of Transparency Are Wrong

• Government transparency is no cure-all and does not always have positive outcomes.

• Transparency is less effective at engendering trust in and legitimacy of government.

• Our analysis suggests that government transparency “works” under some conditions but not under others.

What these conditions are needs further investigation. 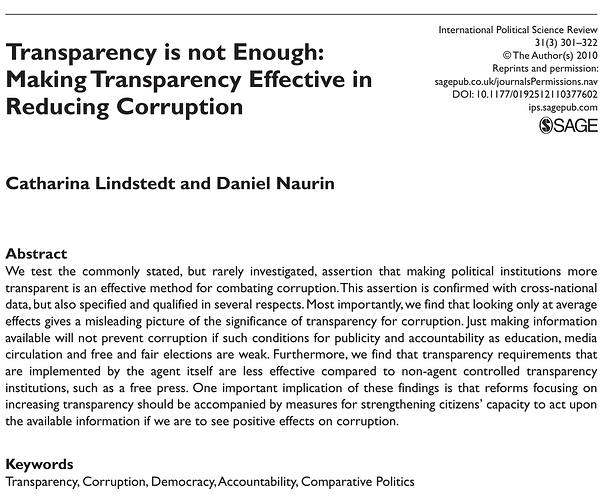 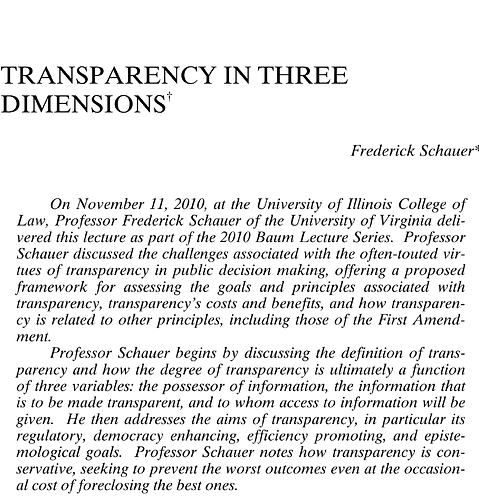 The political origins of transparency reform: insights from the Italian case

This research contributes to the expanding literature on the determinants of government transparency. It uncovers the dynamics of transparency in the Italian case, which shows an interesting reform trajectory: until the late 1980s no transparency provisions existed; since then, provisions have dramatically increased under the impulse of changing patterns of political competition. The analysis of the Italian case highlights that electoral uncertainty for incumbents is a double-edged sword for institutional reform: on the one hand, it incentivizes the adoption of ever-growing transparency provisions; on the other, it jeopardizes the implementation capacity of public agencies by leading to severe administrative burdens. 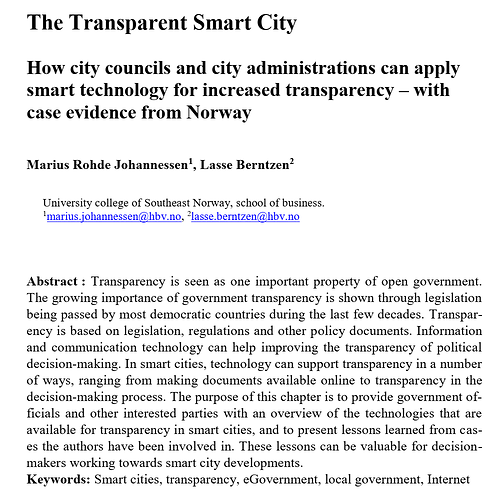 Do Freedom of Information laws increase the transparency of government?

A pre-registered replication of a field experiment

Abstract:
Transparency is a core value of democratic governments, yet do Freedom of Information laws – one of the central legal basis for this value – actually help increase it? This paper reports a pre-registered replication of a field experiment testing for the responsiveness of public authorities to information requests carried out by Worthy et al. (2017) in the United Kingdom. We sent 390 information requests to Dutch local government bodies, half of which were framed as official FOIA requests, the other half as informal requests for information. We were able to reproduce the original findings; that is, we found a positive effect of FOIA requests on responsiveness. The overall response rate of local governments was much higher (76%) and the size of the effect was larger than in the original experiment. Furthermore, the strongest effect of FOI was found on proactive disclosure (concordance), something that governments are not obliged to do according to the Dutch FOIA. Implications and an agenda for systematic replication for future studies is presented.

Transparency and Openness in Government: A System Dynamics Perspective 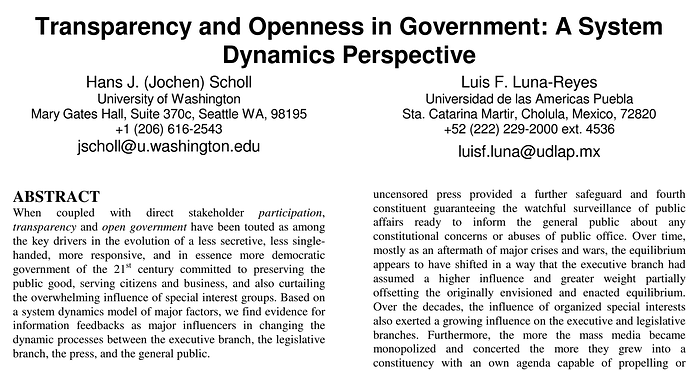 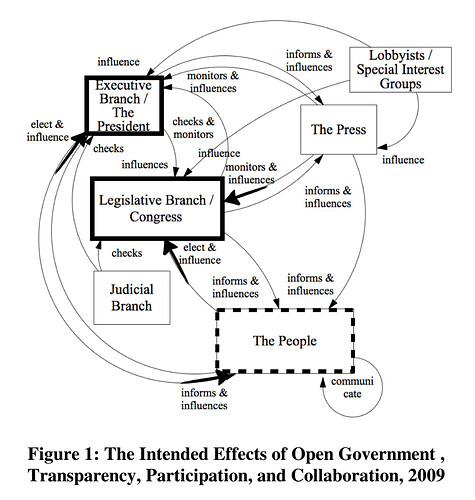 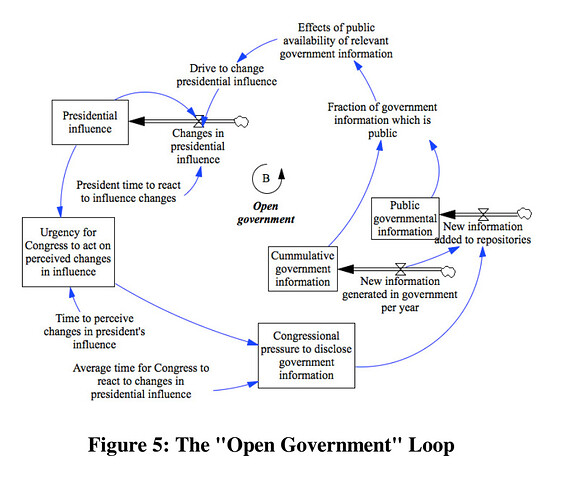 Is Transparency A Lever for Effective Democracy?

Bashir Ghanim
Abstract:
Transparency is a growing demand of the public from government authorities who
responsible of the money of the public. The effectiveness of public agencies depends not
only on outputs and results, but also on the level of support, trust and public satisfaction
from the public sector. Only by relation to these two components together through policy
and action will increase the effectiveness of the public sector.
This article will discuss public transparency and why it is essential to the mechanisms of
democracy.

Government transparency: Are we better off than a decade ago?

Graph 1 presents a rather alarming picture. The horizontal axis reports the answers of the executives on a scale from 0 to 10 in 2007. The vertical axis conveys the perceptions for 2017. The red line represents the 45 degree curve. If the executives of a country perceive that the government transparency has been equally satisfactory in 2007 and 2017, then the country will be in the 45° red line. 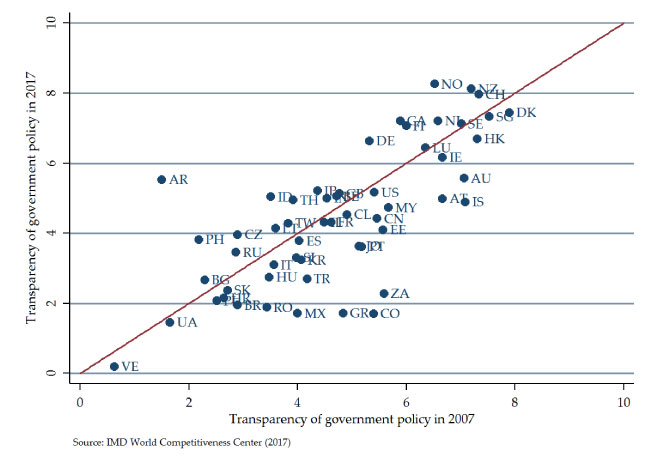 Graph 2 depicts the relationship between transparency and the most recent e-government index. No clear relationship can be identified. Compare, for instance, Switzerland and Slovenia, two countries, which for the same approximate level of e-government, enjoy substantially different levels of transparency. The correlation coefficient is 0.54. 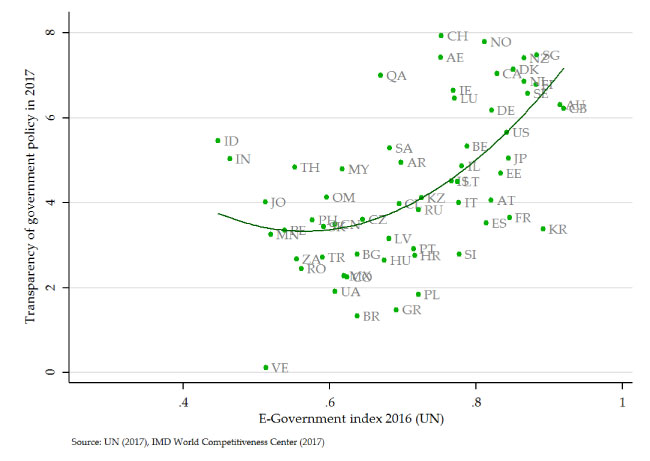 Graph 3 illustrates the relationship between transparency of government policy and the most recent e-participation index provided by the UN. The graph shows that, for the time being at least, e-participation does not relate with transparency and therefore it would be difficult to have any effect on it. Again, compare Norway and Brazil, which for the same approximate level of e-participation exhibit quite different levels of transparency. The correlation coefficient at 0.32 suggests two variables that have almost no relationship. 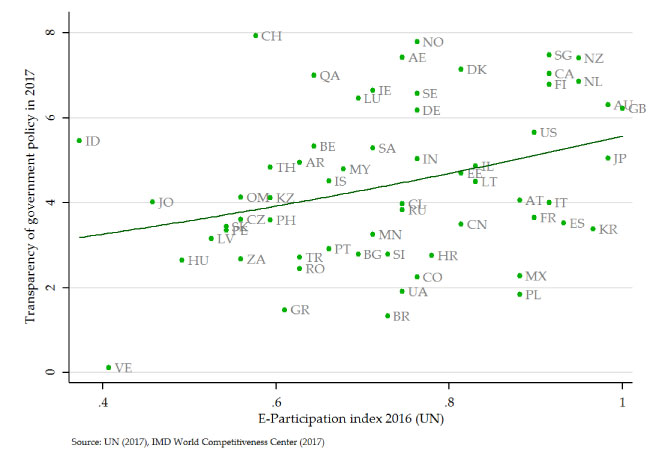 Is Transparency an Anti-Corruption Myth?

Queensland University of Technology - School of Economics and Finance

We look at the effect of transparency on the incidence of costly back-scratching in a laboratory setting by implementing player identification via photographs. In our experimental design players have an incentive to form bilateral alliances in which they favour their partner at the expense of others. We find no improvement in overall group payoffs from transparency. A plausible story that fits our results is that there may be two countervailing forces at play. First, more rapid alliance formation due to social cues from the photographs being used as a coordination device to facilitate faster alliance formation between some players. Second, shorter alliances due to prosocial forces at the group level. We draw out lessons for policy makers about the limits of transparency in curtailing “grey” types of corruption. 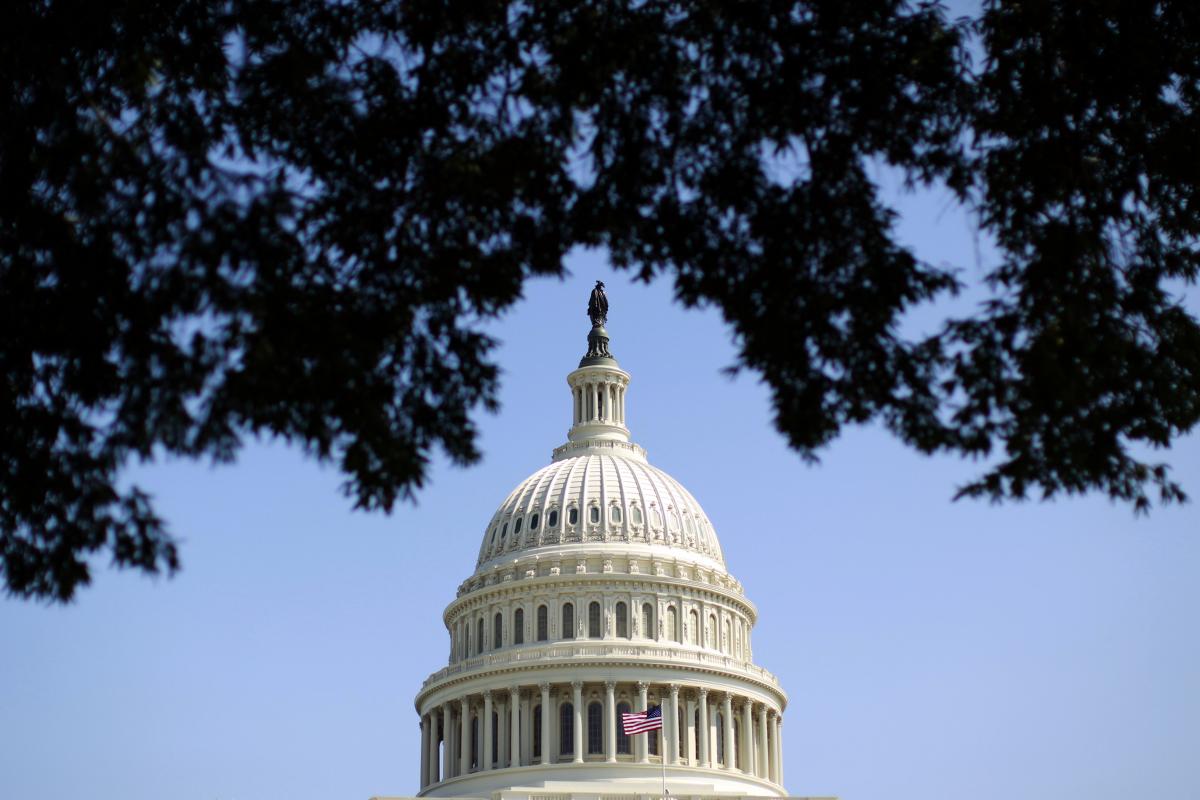 The Dark Side of Sunlight

The so-called sunshine reforms of the 1970s were meant to make Congress more accountable to the public by making it more transparent. Instead, they achieved the opposite by exposing lawmakers to the influence of corporate lobbyists and...

Transparency and mistrust: Who or what should be made transparent?

It is increasingly recognized in public administration that the relationship between trust and transparency is not straightforward. Recently, right-wing populists have risen to power, rejecting transparency requirements based on documents while claiming that they “hide nothing.” Clearly, existing scholarly conceptualizations are insuffi- cient for understanding how transparency operates as a value in real-world political contestation. An analysis of state- and national-level politics in Nigeria reveals that, while always retaining a core informational component, there are multiple competing conceptions of transparency. Popular demands for transparency express a belief that not only should data be made transparent, but also the social networks in which politicians are embedded. “Transparency in people” can clash with more traditional, technocratic transparency practices centered on data. By rethinking who or what should be made transparent—data, things, or people—this article offers fresh theoretical insights on the complex politics of transparency and trust.

Lights on the shadows of public procurement: Transparency as an antidote to corruption

The increased focus on marketizing mechanisms and contracting-out operations following the New Public Man- agement reform agenda has sparked a debate on whether the close interactions between public and private actors might drive corruption in the public sector. The main response to those worries has been increased transparency, but so far empirical evidence of its efficiency remains scant and mixed. This article argues that the beneficial effects of transparency on corruption are contingent on type of transparency, and in particular, who the intended receiver of the information is. Drawing on newly collected data of more than 3.5 million government contracts between 2006 and 2015, the analysis shows that overall tender transparency reduces corruption risks substantially, yet that the effect is largely driven by ex ante transparency, that is, transparency that allows for hori- zontal monitoring by insiders in the bidding process. 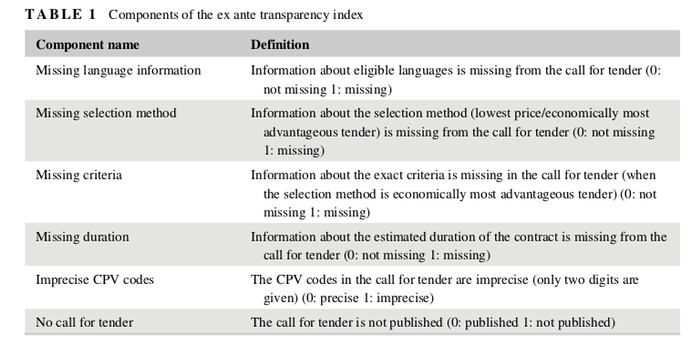 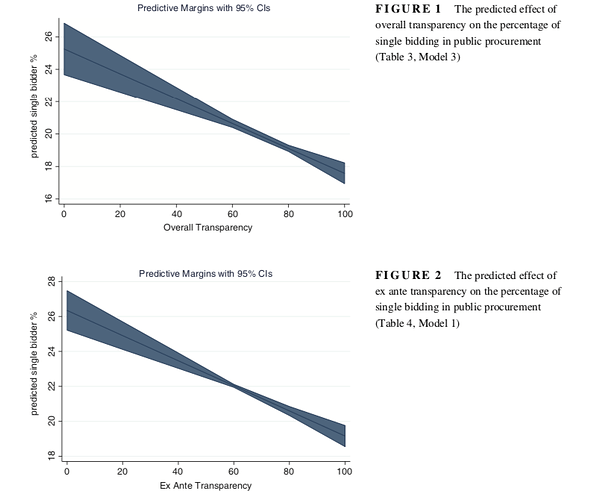