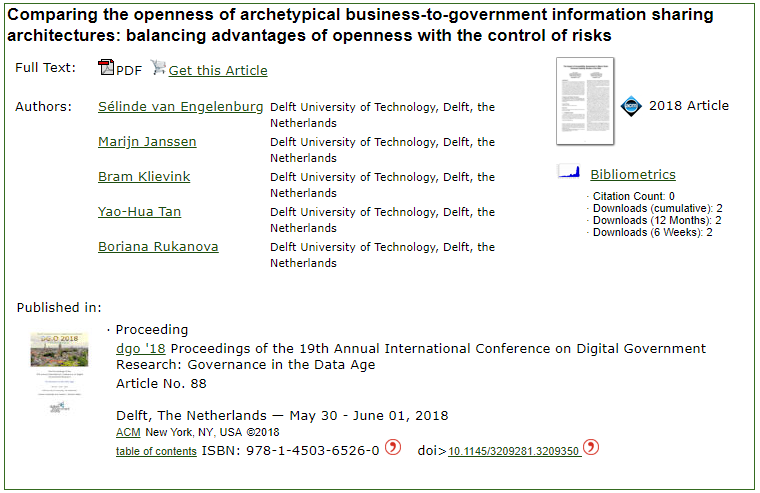 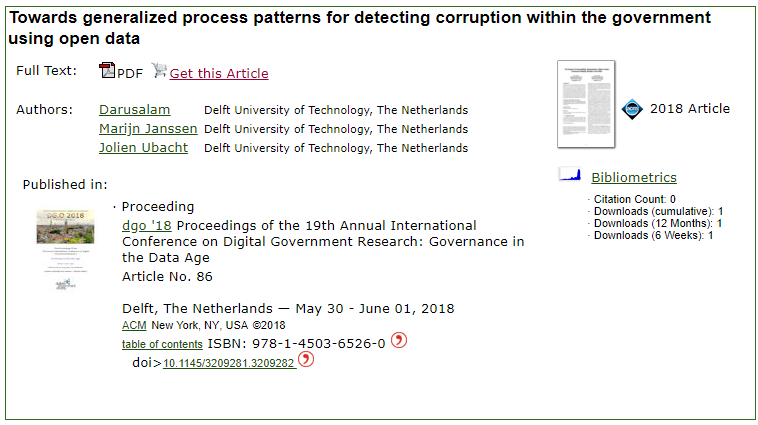 image.png758×425 37.3 KB
Governments are seeking for new ways to fight corruption within their own administration. The opening of data has the potential to involve citizens in detecting corruption by providing them the ability to view and analyze data about what is happening within the government. However, how open data can be used to detect corruption is not clear. In this paper general patterns for detecting corruption using open data are derived. The patterns are derived by analyzing a case study of e-Procurement at the local government level in Indonesia. E-procurement activities and the corresponding audit activities were analyzed. The following patterns for detecting corruption using open data were derived; 1) storing and opening documents, 2) cross-data comparison, 3) four-eyes-principles, 4) segregation of duties, 5) authorization, and 6) publishing application controls. Data about the activities and structure of the administrative processes should be opened to allow the public to scrutinize whether the process has implemented preventive and detective controls following the process patterns derived in this research. Furthermore, data should be opened about all phases of the administrative processes to enable the involvement of the public and use their ‘many eyes’ for detecting corruption.
https://dl.acm.org/citation.cfm?id=3209282
Khani جون 5, 2018, 9:57ق.ظ #5
Theory and practice of linked open statistical data 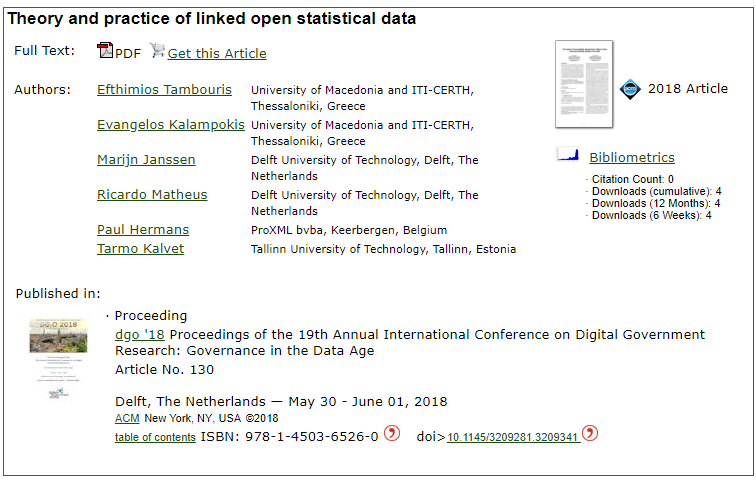 image.png756×480 40.5 KB
The number of Open Statistical Data available for reuse is rapidly increasing. Linked open data technology enables easy reuse and linking of data residing in different locations in a simple and straightforward manner. Yet, many people are not familiar with the technology standards and tools for making use of open statistical data. In this tutorial, we will introduce Linked Open Statistical Data (LOSD) and demonstrate the use of LOSD technologies and tools to visualize open data obtained from various European Countries. We will also give the participants the opportunity to use these tools thus obtaining a personal experience on their capabilities.
https://dl.acm.org/citation.cfm?id=3209341
1 Likes
Khani جون 5, 2018, 10:54ق.ظ #6
How to improve policy making using open data in virtual research environments: an interactive workshop discussing privacy, security and trust strategies 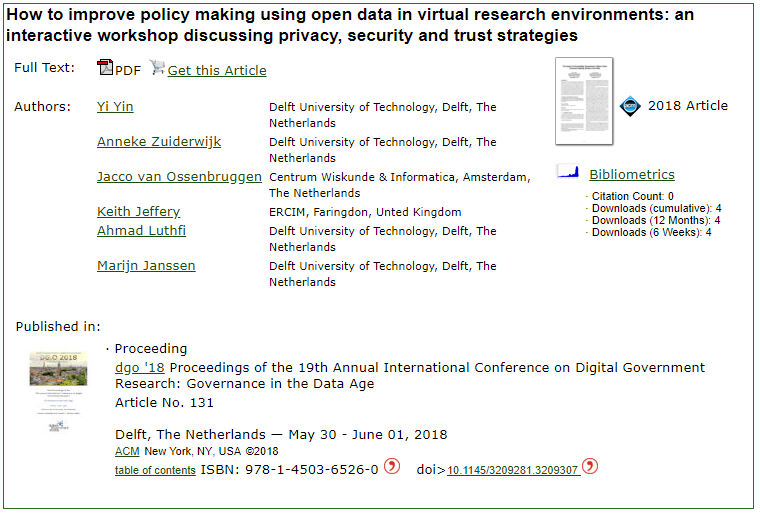 image.png760×514 43.2 KB
Governments and publicly-funded research institutions increasingly open up data collected and created through research. One way to share and use data obtained through research is through Virtual Research Environments (VREs). Insights obtained through open data use in VREs can subsequently provide input for policy making. However, this process involves many privacy, security and trust issues both for VRE developers and for end-users. We still know very little about what strategies can be used to handle these security, privacy and trust issues. This 1,5 hour interactive workshop aims to discuss and refine strategies for handling privacy, security and trust issues of VREs and their users as developed in the European VRE4EIC project. The workshop will facilitate open discussions making use of the interactive Mentimeter tool to involve all participants in the sharing of practices and in sharing feedback on the strategies.
https://dl.acm.org/citation.cfm?id=3209307
Khani جون 5, 2018, 5:37ب.ظ #7
Gaming to improve public policies by engaging local governments in open data policy-making 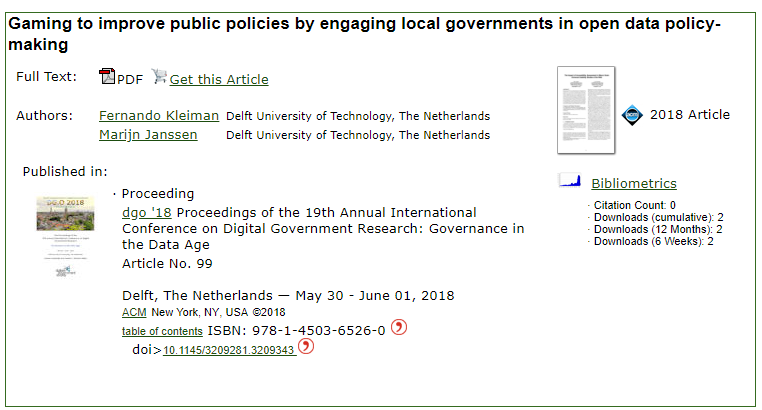 image.png762×410 35.9 KB
Open government is a trend of public administration that strengthens the relationship between governments and the public. In open government, the opening of data is the mean to make governmental information accessible for citizens, firms, NGO’s and other public bodies. However, one of the challenges is still to get national and local governments to open their data for use. There exist already national governmental policies for open data and research has been developed to support policies and to understand its effects. Opening by default requires that politicians and public servants change their behaviour towards the opening of data. The objective of the present research is to present how games can be used to change the behaviour of local government’s civil servants towards providing and using open data to improve the public policies with which they work (overcome cultural resistance against opening data). Therefore, the engagement of civil servants in open data usage will be experimented through games with various interactions forms. Evaluation of what works (and what does not work) will be registered to produce new inputs on how to use gaming exercises on public policies in general and for local Open Data Policies specifically.
https://dl.acm.org/citation.cfm?id=3209343
1 Likes
Khani جون 5, 2018, 5:38ب.ظ #8
Citizen engagement in an open election data initiative: a case study of Indonesian’s "Kawal Pemilu" 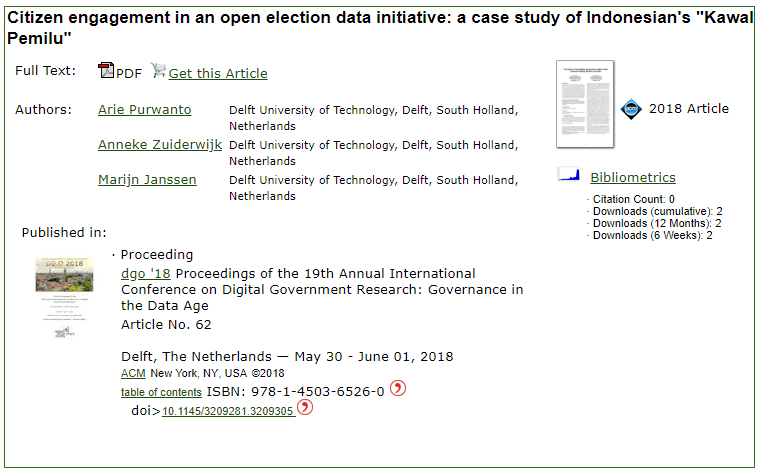 image.png759×473 38.7 KB
Citizen engagement is key to the successful and sustainable use of Open Government Data (OGD), involving multiple activities ranging from the retrieval and conversion of raw data to OGD based applications, to the use of these applications to solve societal problems. However, there is a lack of insight into what drives citizens to engage in OGD initiatives. Such insight helps inform policymakers in stimulating and improving the engage ability of an OGD program. This study aims to identify factors that influence why citizens engage in OGD initiatives. To attain this objective, we conducted a single case study of citizen engagement in an open election data initiative in Indonesia. Our study shows that social altruism as an intrinsic motivation is a strong driver for citizens to start and continue engaging with open election data. Low data quality appeared not to hinder citizens from engaging in the OGD initiative; in contrast, it can lead to more engagement. Election is typically concerning with political participation, yet trust and political efficacy factors only marginally influenced citizen engagement in our case study. The case shows that, in a time-critical situation where potential social conflicts were seen to threaten the citizens’ lives, collective actions are enabled by the availability of OGD. We draw some key lessons learnt for policymakers to enhance OGD engage ability. Further research is needed to examine whether factors found in this particular case also apply in different settings.
https://dl.acm.org/citation.cfm?id=3209305
Khani جون 22, 2018, 3:47ب.ظ #9

Promoting the use of open government data: Cases of training and engagement 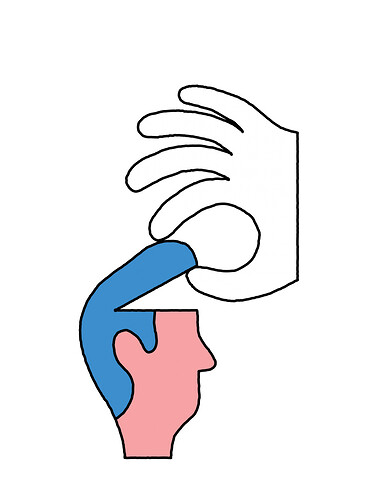 The internal-combustion engine has been dominant for over a hundred years—not because it’s the best possible engine, but because it gained an initial advantage through historical accident. The QWERTY keyboard layout was designed to be deliberately inefficient so that the mechanical keys of the typewriter would jam less frequently. That feature is no longer relevant, but it doesn’t matter—we’re still typing on QWERTY keyboards, because that’s what people are used to.

The same principle is what makes Google or Facebook or Amazon so massive. We use them because we’re used to using them. Google’s not just a search engine; it’s an e-mail address (Gmail), a conference-call maker (Hangouts), a document creator and editor (Docs). All are designed to maximize the advantages of sticking with Google: if you don’t have a Gmail address, you can’t use Google Hangouts. And so on. 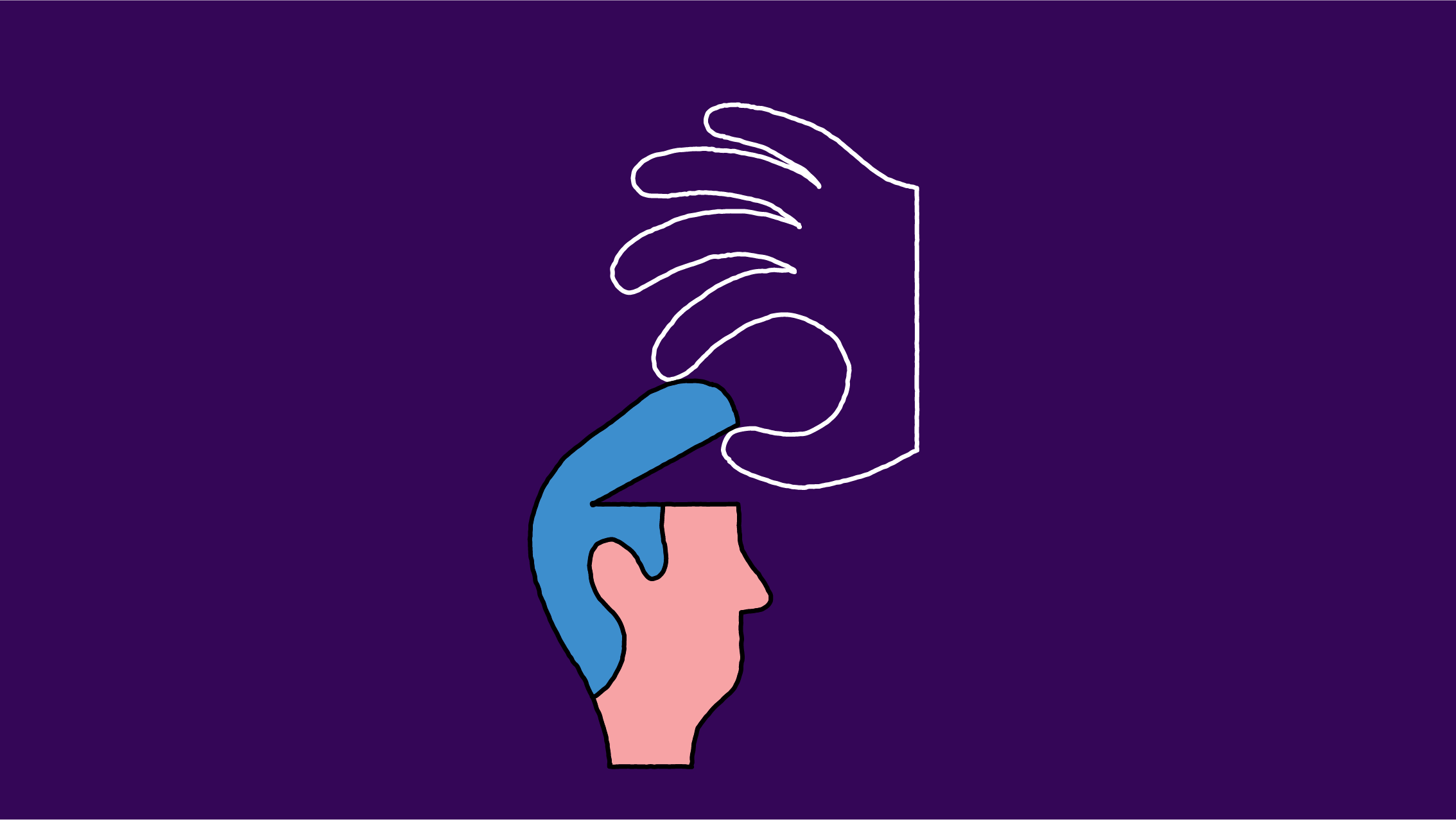 The internet giants depend on our data. A new relationship between us and them could deliver real value to society. 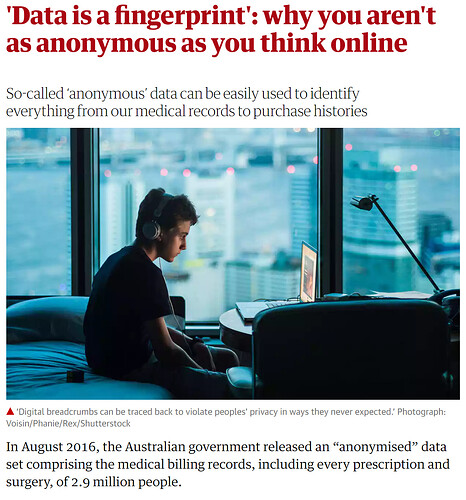 'Data is a fingerprint': why you aren't as anonymous as you think online 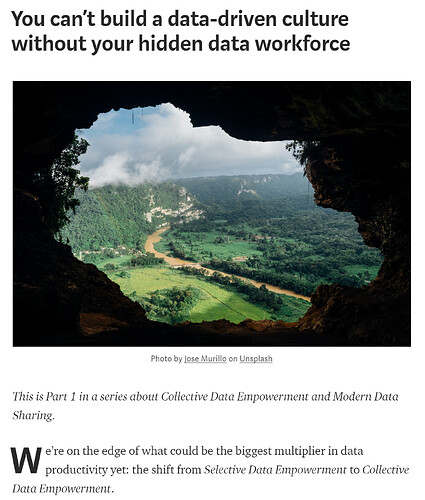 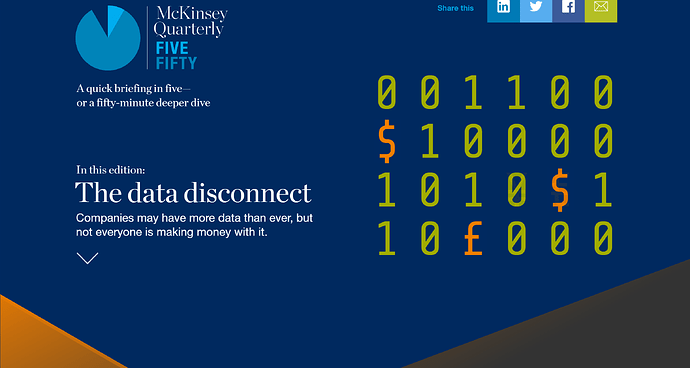 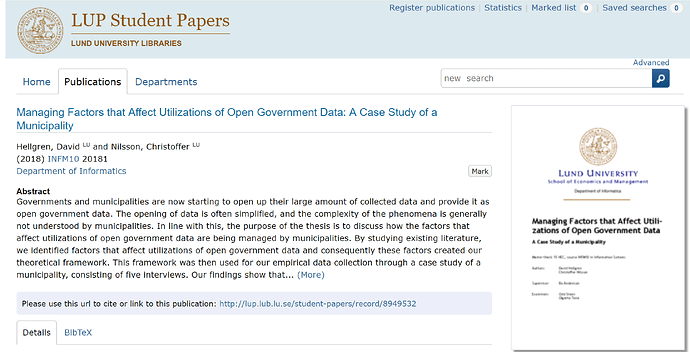 The Federal Government in the United States has a long tradition in promoting citizen access to information. In the last years, and promoted by strong support from the Executive, Federal Government Agencies have engaged in understanding, cataloguing and publishing their data assets. Beyond the exercise of cataloguing data assets, Federal Agencies have also worked on specific projects in their own domain, and sometimes across domains or national borders. The main purpose of this paper is to assess current progress of the Open Government Data (OGD) policy in the US Federal Government, identify enablers and current challenges, also providing some recommendations to move forward with the vision of OGD.

A System of Innovation to Activate Practices on Open Data: The Open4Citizens Project

The increasing production of data is encouraging government institutions to consider the potential of open data as a public resource and to publish a large number of public datasets. This is configuring a new scenario in which open data are likely to play an important role for democracy and transparency and for new innovation possibilities, in relation to the creation of a new generation of public services based on open data.

In this context, though, it is possible to observe an asymmetry between the supply side of open data and the demand side. While more and more institutions are producing and publishing data, there is no public awareness of the way in which such data can be used, nor is there a diffuse practice to work with those data.

The definition of a practice for a large use of data is the aim of the Open4Citizens project, which promoted initiatives at different levels: at the level of immediate interaction between citizens, experts and open data, at the level of the creation of an ecosystem to work with data and at a level that could support the institutionalisation and consolidation of the new practice. 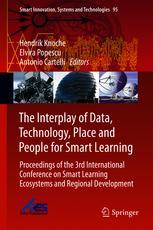 A System of Innovation to Activate Practices on Open Data: The Open4Citizens...

The increasing production of data is encouraging government institutions to consider the potential of open data as a public resource and to publish a large number of public datasets. This is...

A System of Innovation to Activate Practices on Open Data The Open4Citizens Project.pdf (1.7 مگابایت) 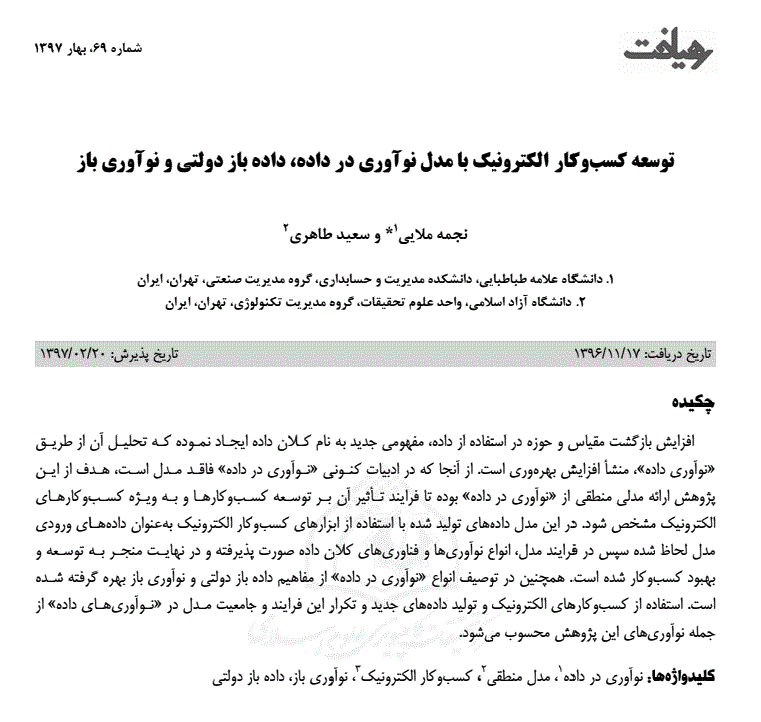 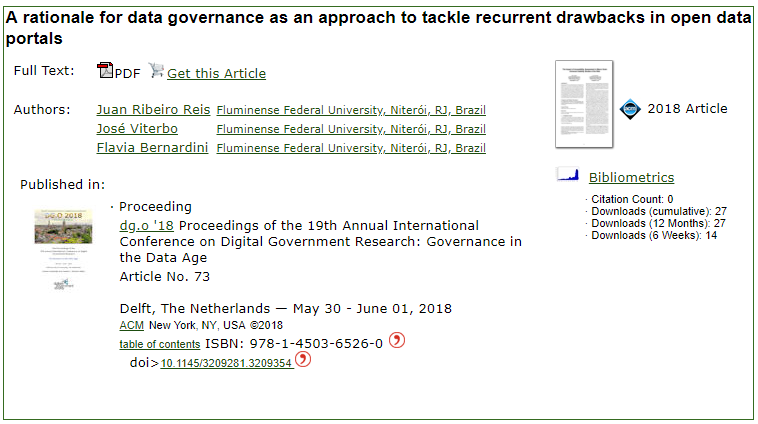 Citizens and developers are gaining broad access to public data sources, made available in open data portals. These machine-readable datasets enable the creation of applications that help the population in several ways, giving them the opportunity to actively participate in governance processes, such as decision taking and policy-making. While the number of open data portals grows over the years, researchers have been able to identify recurrent problems with the data they provide, such as lack of data standards, difficulty in data access and poor understandability. Such issues make difficult the effective use of data. Several works in literature propose different approaches to mitigate these issues, based on novel or well-known data management techniques. However, there is a lack of general frameworks for tackling these problems. On the other hand, data governance has been applied in large companies to manage data problems, ensuring that data meets business needs and become organizational assets. In this paper, firstly, we highlight the main drawbacks pointed out in literature for government open data portals. Eventually, we bring around how data governance can tackle much of the issues identified.